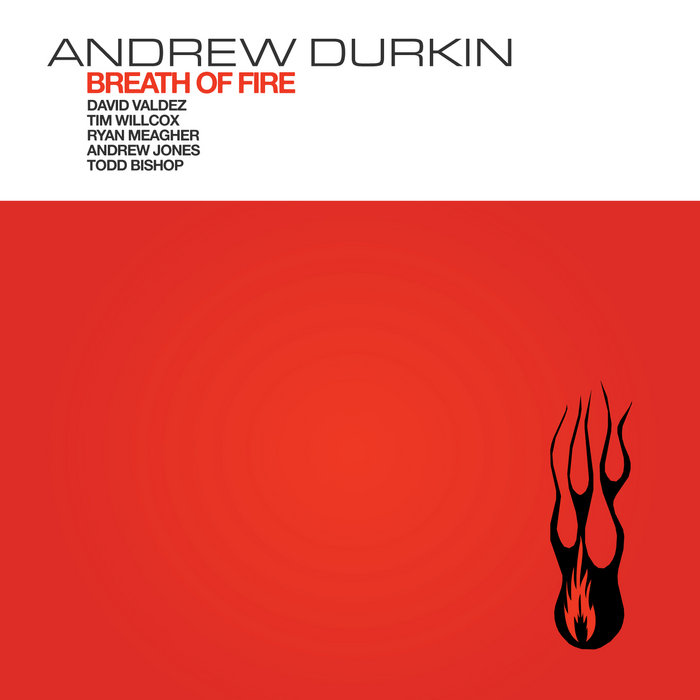 Featuring David Valdez on alto sax, Tim Willcox on tenor sax, Ryan Meagher on guitar, Todd Bishop on drums, Andrew Jones on bass, and Durkin on piano and compositions, Breath of Fire is a sonic exploration of existence and mortality.

Durkin, a Portland-based composer who now lives with the chronic pain of Ankylosing Spondylitis (a progressive arthritis of the spine), turned to yoga during the making of this record, and drew on a Kundalini breathing technique for its title. In yoga, “breath of fire” helps us stay grounded through personal struggles of body and mind. On this album, it is a metaphor for how music—with its capacity to move us, bring us together, and make us laugh or cry—helps us stay grounded through the broader struggles of life.

Best known for his work with Los Angeles’s cult-favorite big band, the Industrial Jazz Group, Durkin has honed an eclectic, personal style influenced by composers Frank Zappa, Raymond Scott, Spike Jones, Charles Mingus, Carla Bley, Duke Ellington, and Thelonious Monk, and incorporating elements of metal, Baroque, and American roots music. He released five albums with the IJG, with whom he also performed throughout the United States, as well as in the Netherlands, and Italy. In addition to its music, that group was once known for its strange costumes, Situationist stagecraft, and irreverent attitude. But Durkin has also written for less raucous contexts, including soundtracks for experimental films, and commissions for various schools and performance groups on the West Coast.

In 2011, Durkin, who has a PhD in English Literature and was one of the pioneers of the “jazz blogosphere,” embarked on a second career as an author. He has since devoted as much time to writing prose as to writing music. In 2014, Pantheon Books published his literary debut; a nonfiction study called Decomposition: A Music Manifesto, which Los Angeles Magazine included in its list of the “Best Little Music Books of 2014.” Composer Gavin Borchert, writing in the Seattle Weekly, called Decomposition “impressive and absorbing,” and pianist and writer Ethan Iverson hailed it as “fun and provocative.”