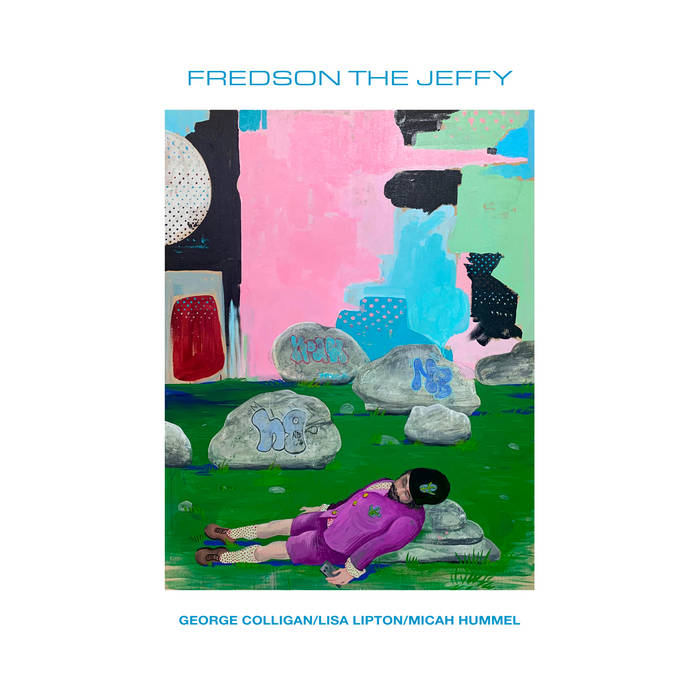 The fevered mind of George Colligan took no rest during the COVID-19 pandemic. Classical clarinetist, Lisa Lipton, was looking to have a new piece composed that incorporated improvisation. She was introduced to Colligan through their mutual collaborator, Micah Hummel (drums). From this came the commissioned piece “Illegitimi non carborundum” (which appears on this album). The piece gets its title from a mock-Latin aphorism, often translated as "Don't let the bastards grind you down", something Colligan’s father used to say. When the trio performed the piece, he was reminded of his time playing in Don Byron’s trio, Ivey-Divey. This inspired him to write more music for this specific ensemble. The result is this twelve track full-length album, Fredson the Jeffy.

Colligan has always been influenced by the classical music of western Europe, and he even majored in classical trumpet at Peabody Conservatory. The thought of composing music that was influenced by composers like Debussy, Messiaen, Stravinsky, and Schoenberg interested him. Lipton’s adventurous spirit (she is a licensed pilot, afterall) comes from the classical tradition but she is a facile improvisor. That inspired Colligan to write more music and turn that first piece into a full-fledged project.

The improvisation that takes place on the album happens in a few ways. Sometimes the melodic improvisation is derived from the harmonic structure of the compositions. This process is not terribly different than it might be on most jazz albums. Other times, the melodic improvisations do not have a root in prescribed harmonic structure, but are bound by a specific rhythmic underpinning. There are other improvisations that stem from ostinatos, and there are also parts that are freely improvised (or composed spontaneously). The end result is a trio of instrumentalists of the highest calibre executing difficult new music unabashedly with passion and perfection.

PJCE Records has been championing originally composed music from Oregon area artists for the better part of a decade. It even found a way to keep its jazz scene active through the pandemic with its laboratory series, LIVE EP. Live performances came to a halt in 2020, and things are slowly heading back to pre-COVID ways, but artists never stopped creating. This newest release from George Colligan is one of those post-COVID releases you were hoping would happen.

About the Artists
George Colligan is a pianist, organist, drummer, trumpeter, teacher, and bandleader, who is one of the most original and compelling jazz artists of his generation. An award-winning composer (Chamber Music America/Doris Duke Foundation grant recipient, RACC Grant Winner) and player (winner, Jazzconnect.com Jazz Competition, DownBeat Critics Poll Winner), Colligan is highly in demand as a sideman, having worked with players like Jack DeJohnette, John Scofield, Cassandra Wilson, Ravi Coltrane, and many others both on the bandstand and in recording sessions (appearing on over 150 CDs). He has released 31 recordings full of his intelligent writing and impressive technique.
Colligan’s musical style incorporates everything from showtunes to funk, from free improvisation to 20th century classical music. His performances include dazzling technique as well as mature restraint. Colligan was on the faculty of the Juilliard School for two years and is currently an Assistant Professor at Portland State University. He is currently a member of Jack DeJohnette’s New Quintet. Recently, Colligan started playing the Hammond 44 Melodion (melodica). He also started a popular blog called jazztruth (jazztruth.blogspot.com).

Lisa Lipton, clarinetist, impresario, and arts entrepreneur studied at Portland State University for her undergrad as well as The Central Chinese Conservatory of music in Beijing. As Executive Director of Opera Theater Oregon, one of the founders of Contemporary Portland Orchestra Project, longtime collaborator of Filmusik, and other new music collectives in PDX, she is an avid performer and advocate of new music. As a performer she is extremely versatile having performed with numerous symphonies in the region and festivals such as Decibel festival, TBA festival, PDX Pop Now!, Music FestNW, Astoria Music Festival, and many others. She was featured as a prominent clarinet soloist on the Sony Pictures Classic Film French Exit starring Michele Pfieffer in 2020. She aspires to continue the dialogue of sharing new ideas and relevant art with the Portland community and is excited to continue this work through Opera Theater Oregon and in the trio Fredson the Jeffy with jazz musicians George Colligan and Micah Hummel.

Micah Hummel is a sought-after drummer, composer, and music educator based out of Portland, Oregon. After relocating from the Sonoran Desert in 2013, Micah has already established himself as an essential part of the creative music scene in the Pacific Northwest. Honing his craft throughout the last decade, Micah is known for his specialty in cross-genre sounds and contemporary music. Micah has performed around the globe in countries such as Germany, Austria, Canada, France, Switzerland, China, and Morocco. Micah always enjoys getting to share music with people and the opportunity to connect with other cultures through his instrument..

Recorded, Mixed and Mastered by Randy Porter at Heavywood Studios in Lake Oswego, Oregon
Cover Art by Noah Becker
“The Prodigal Son” 2020
Ryan Meagher, Executive Producer
Special thanks to the Regional Arts and Culture Council for a generous grant to support this project
All compositions by George Colligan
(Sesac/GHCIV Music)