From Maxville to Vanport 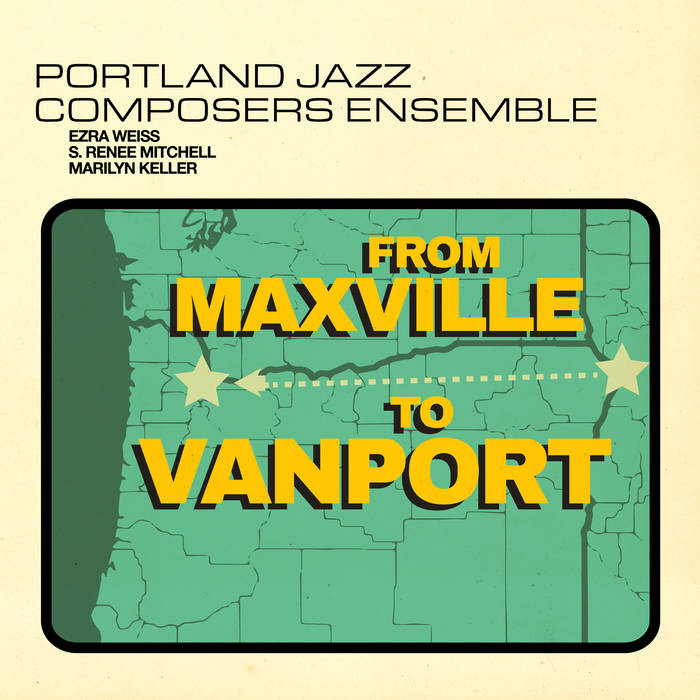 From Maxville to Vanport celebrates the history of two towns that reveal distinctive viewpoints of the state’s under-represented Black history. Looking honestly at the prejudice these people faced, the album celebrates their resilience, courage, and important contributions to Oregon through jazz, R&B, and blues.
The music, composed by Weiss with lyrics by poet S. Renee Mitchell, is performed by the PJCE with vocalist Marilyn Keller. The project also includes two film shorts by filmmaker Kalimah Abioto scored by Weiss that will be available with the digital download of the album. PJCE’s Executive Director, Douglas Detrick, served as the artistic director of the project.


THE SONGS AND FILMS OF FROM MAXVILLE TO VANPORT
Oregon is seen as a beacon of hope in the album’s initial blues-influenced song, “Oregon Sounds Like Freedom,” which immediately introduces the power of Marilyn Keller’s voice. The opening fanfare transitions into an Afro-Cuban 12/8 rhythm where Rob Davis’s muscular yet lithe tenor sax solo adds an insistent accent to the hopeful and occasionally humorous lyrics.

In the poignant “What Do Your Trees Tell You,” Weiss introduces dramatic chords that reappear throughout the piece as a theme of “struggle.” With lyrics reminiscent of “Strange Fruit,” the trees themselves take on new meaning, symbolizing the chance for a brighter future rather than the brutal reality of lynchings in the South. Clarinets, bass clarinet, and flute add an orchestral character to this piece, while Douglas Detrick’s soaring flugelhorn solo contrasts beautifully with Keller’s deeply grounded vocal.

Previously, little was known of these small populations of Black Oregonians and even less about the lives of the women in Maxville and Vanport. In the Motown-esque song, “Woman’s Work,” “sleep is like a tourist,” a fleeting presence in the lives of the hardworking women of Maxville. John Moak’s trombone solo gets funky before the instrumental ending evokes the sleep deprivation Mitchell describes in the lyrics.
In the first film score, “Marjorie,” the main character is the wife of a Maxville logger who imagines a glamorous life for herself in the city as a musician accompanied by Jasnam Daya Singh’s swirling piano arpeggios and Mieke Bruggeman’s wistful baritone sax. Weiss expands on the fanfare from the first song at a slower tempo here that makes his chords glisten.

“Stacked Deck Hand” is a down-home blues tune that asks how one can win in cards or life when the deck is stacked against you. It has all the swagger and soul that you expect from a swing-era blues lyric, much like those shipyard workers in Vanport might have heard during WWII. But it also goes deeper, celebrating family, perseverance, and faith. Here, Weiss highlights Farnell Newton’s technical facility and bluesy voice-like timbres on the trumpet.

“Water,” the second film score/track, opens on a boy playing outdoors—climbing and running, playing marbles, and boxing while revisiting the album’s fanfare opening playfully reimagined as a fast waltz. The mood quickly shifts as the boy sees rushing waters that foreshadow the Vanport Flood of 1948. Then music sinks into the unusual chords from top of “What Do Your Trees Tell You,” and we see the boy as a man, remembering rather than anticipating the flood of emotions he felt at the loss of his home.

Rising from this adversity, “From Maxville to Vanport,” the closing piece of the album, marvels at the resilience of people who gave up everything they had for an uncertain future and wound up making history. “Oregon didn't want black folks to stay/ But we planted roots here anyway,” the song says. Keller shines while contemporary, unconventional orchestration techniques master the challenge of a 13-member ensemble playing at a rubato tempo. Weiss combines the earlier "struggle" theme with the optimistic melodic contour from "Oregon Sounds Like Freedom." Now unified as a single musical idea, they suggest the coexistence of struggle and hope as we address racism in our nation.


ABOUT THE CREATIVE TEAM
Marilyn Keller is a singer who performs a diverse range of jazz, gospel, and musical theatre throughout Oregon and abroad and was voted into Oregon Jazz Society’s Hall of Fame 2016. She joined Black Swan Classic Jazz Band in 1997, and she has is active in a variety of ensembles and styles, singing with the Don Latarski Group, Darrell Grant’s The Territory, Thara Memory, Tall Jazz, Disciples in Song, and the Augustana Jazz Quartet among many others.

Ezra Weiss has recorded seven albums as a bandleader, most recently “Before You Know It,” recorded live in Portland and has written three musicals for Northwest Children’s Theater. He has led his own bands at major venues throughout the US including several week-long engagements at Jazz at Lincoln Center’s Dizzy’s Club. He won the ASCAP Young Jazz Composer Award three times and was listed in 2012 and 2013 DownBeat Critics Polls as a Rising Star Arranger. He currently teaches at Portland State University and holds a Bachelors in Jazz Composition from the Oberlin Conservatory and a Masters in Jazz Piano from Queens College.

S. Renee Mitchell is an award-winning writer, multimedia artist, social justice advocate, and educator. Mitchell's more than 25 years of journalism experience has groomed her exceptional communication, analytical and grant-writing skills, yet, she is also a community-grounded visionary. She is the 2015 Yolanda D. King Drum Major Award winner in recognition of dedicated community service; was the librettist of “Sherman: A Jazz Opera;” has published a novel, children’s story, and several small-press zines; and teaches writing to children as the leader of the Saturday Academy Social Justice Camp as well as many other Portland, Oregon institutions.

A native of Memphis, Tennessee, Kalimah Abioto makes films centered around dreams, sexuality, and the nexus between Black people, humans, freedom, and the natural-spirit worlds. She received her BA in Film and Video from Hollins University and is a co-creator, along with her four sisters, of The People Could Fly Project, a multimedia project documenting the dreams and stories of people in the African Diaspora. Abioto has worked with Afropop Worldwide, Holy Mojo, The Black Portlanders, Spirit Law Center, Diamond Law, and other groups.
Gwendolyn Trice founded Maxville Heritage Interpretive Center, a non-profit cultural heritage center in Wallowa County, Oregon and currently serves as its Executive Director. She also provided support and information for Oregon Public Broadcasting’s 2009 film Logger’s Daughter. Currently, she serves on the Oregon Commission on Black Affairs and is part of a Leadership cohort for the Center for Diversity and Environment.

SHARING FROM MAXVILLE TO VANPORT
Among the homesteaders, loggers, and ranchers who were Oregon’s early settlers, Black Americans played vital roles despite being legally barred from living in Oregon by the state’s constitution. From Maxville to Vanport connects two blue-collar, multicultural communities that existed decades apart, but tell an important story about the Great Migration in the Pacific Northwest.
PJCE is committed to creating an artistic and cultural context where Oregon’s jazz community can participate in our society’s most pressing conversations. PJCE’s Executive Director Douglas Detrick, an Oregon-raised history buff, first learned about Maxville from a Wallowa County resident and immediately saw a connection to Vanport. Both towns were short-lived communities built to house multicultural workforces. The stories of these help people help to explain why Oregon looks the way it does now.
The album invites the audience to consider what Oregon represents. Was it worth leaving one’s home to get there? Was freedom available to Black Oregonians in 1923? In 1948? In 2018? From Maxville to Vanport suggest, as the first track on the album says, “Oregon Sounds Like Freedom.” Maxville and Vanport were populated by hard-working people who decided the reward was worth the risk.

HISTORY OF MAXVILLE AND VANPORT
Maxville was a logging town, built in 1923 and shut down in 1933, in Wallowa County, Oregon’s northeastern extreme. Vanport, built in 1942 just north of Portland for shipyard workers, was destroyed in a matter of hours by the flooding Columbia River in 1948. Both towns were multicultural communities that housed workforces with significant African American and immigrant populations at a time when many Oregonians were openly hostile to them.
From the beginning of World War I through the 1960s, millions of Black people moved from the South in a mass exodus called the Great Migration. They did so to escape the oppressive conditions of the South where African Americans were systematically forced into a second-class existence through Jim Crow laws, and lynching was a constant threat. Jazz was a product of the Great Migration too. Louis Armstrong moved from New Orleans to Chicago in 1922. There he would make his first recordings and eventually become one of the world’s best-known musicians—achievements he would have been unlikely to attain had he stayed in New Orleans.


A COMMUNITY-DRIVEN PROCESS
From Maxville to Vanport is a collection of contemplations and commemorations created in a year-long composition process that began with community discussion events—attended by descendants of Maxville loggers and Vanport flood survivors—in Portland and Joseph, Oregon (a small community in Wallowa County near the historic Maxville townsite) in the fall of 2017. That feedback, along with extensive conversations with Maxville Heritage Interpretive Center Executive Director Gwendolyn Trice, whose father worked was a logger at Maxville, informed the creation of the piece. The project was funded by the Oregon Community Foundation’s Creative Heights program and was sponsored by the Oregon Historical Society. Project partners include Vanport Mosaic, Josephy Center for the Arts, Crossroads Carnegie Center for the Arts, Eastern Oregon University, and the OK Theatre.


MORE ON FROM MAXVILLE TO VANPORT
This album release happens in conjunction with a live performance March 3, 2019 at Portland, Oregon’s Mission Theater as part of the PDX Jazz Festival.