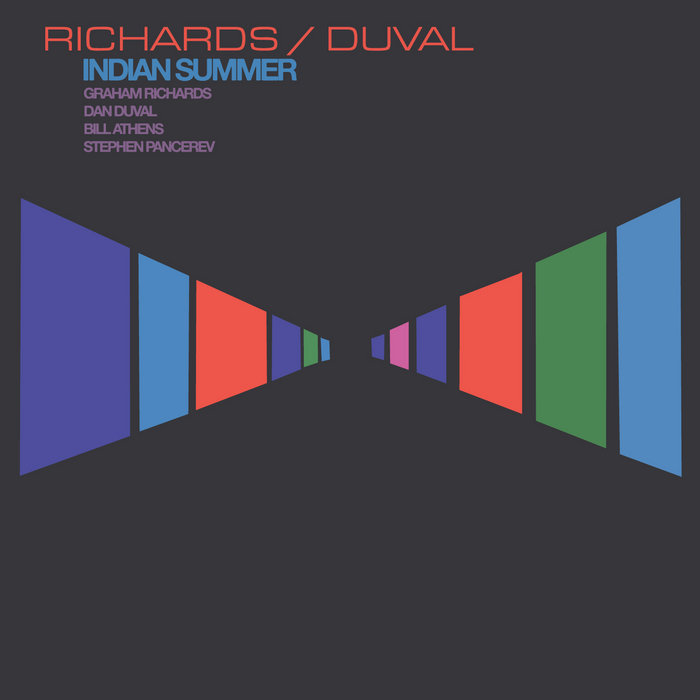 Pianist Graham Richards and guitarist Dan Duval present their debut album, “Indian Summer,” an ambient jazz painting. The album begins before birth, and concludes, after a journey through various seasons and climes, with a return to stillness and silence. This meditation on our beautiful but fleeting time on Earth features ubiquitous Portland rhythm section Bill Athens (bass) and Stephen Pancerev (drums).

Like other PJCE Records releases, this is a brand new band comprised of musicians who have a rich history of playing together in a wide array of settings. Bandleaders Graham Richards and Dan Duval first met during their youth in California, worked together in Boston where they both attended Berklee College of Music, and have now reunited to collaborate on their debut album of original music. Drummer Stephen Pancerev has worked extensively with Duval in the award winning chamber jazz ensemble The Ocular Concern, and bassist Bill Athens and Duval have worked together with a wide array of musicians from the Portland jazz and improvised music community. This new ensemble is informed by all of this shared experience. They way the group breathes together as a single voice exudes a distinctly west coast flavor throughout the suite of expansive, unhurried mood pieces.

Co-leader Graham Richards has played a key role in the production and programming of the album. This is his first record as a leader, and his playing and writing are featured here to great effect. He contributed the following thoughts on the concept of the name and the album.
‘Indian summer’ is a name for the period after the ground has frosted and the summer crops have died, but the sun shines defiantly in the sky for a ‘second summer.’ The concept for this album, in short, is that we all live in this brief period of grace. Winter is already upon us, but for now the sun shines. The title "Indian Summer" is not chosen lightly. My motivation for using it refers to the following:

1) my favorite time of year (note: bonus-summer, not pretend-summer)
2) the ‘grace’ period of our lifetime (In-dios, in God, etc.)
3) the mourning of loss, the end of era, the cycle of life and death, the changing of seasons as perceived by those who live with the land.
4) an acknowledgement that great harm was done to our Native brothers and sisters and their tribes. It is the story of the end of a culture, the end of all things, and this music is mournful and nostalgic for the last of summer before the long cold winter set in forever. ‘Indian Summer’ does not refer to stereotypes ascribed to a people; rather, it is a metaphor for our communal sense of ‘borrowed time’.

Recorded 10/30/13 and 11/16/13 at The Map Room in Portland, OR
Engineered by Josh Powell
Mixed at Troll House, Redwood City, CA by Anthony Caruso
Additional recording and mixing at Blanketfort, Livermore, CA by Graham Richards
Mastered by Josh Powell
Produced by Graham Richards and Dan Duval
Special Thanks to G Koop, Fuzz Deluxxe, Oakland, CA
Thanks to Alden Lane Nursery for wind and water sound effects