My Dreams, My Journey

by Marilyn Keller with Darrell Grant 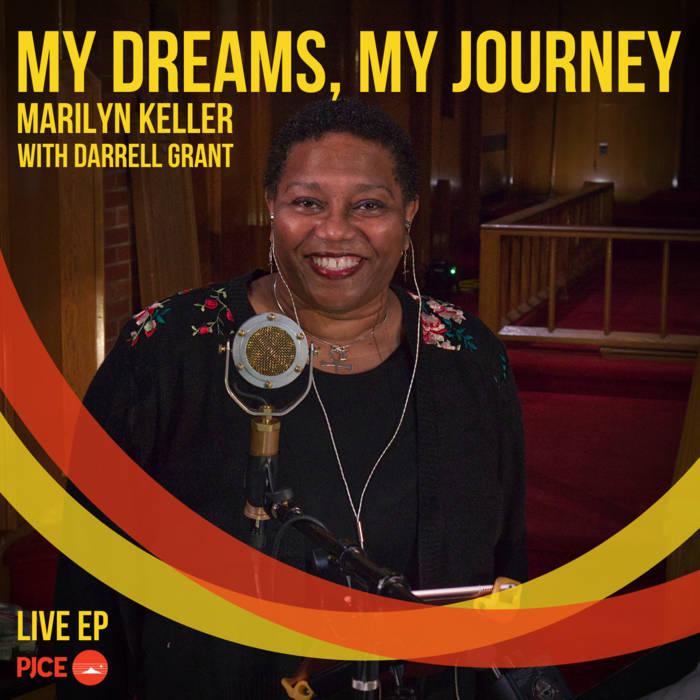 Themes of faith and love in new songs by Marilyn Keller with composer and pianist Darrell Grant. A live video premiere and EP release as part of Blackfish Gallery’s Be About Love Festival.

My Journey, My Dreams, with lyrics by vocalist Marilyn Keller, and music by composer/pianist Darrell Grant was commissioned by Portland Jazz Composers Ensemble (PJCE) for the Blackfish Gallery Be About Love Festival in October, 2020. Keller is a treasured veteran of Portland's jazz and gospel music scenes who is often called in to bring life to songs by others. In this project, she steps forward as a creative director and lyricist. Keller and Grant with Damian Erskine on bass and Machado Mijiga on drums performed the music in a pre-recorded video at Augustana Lutheran Church.

This new music will "deal with the times we are living in, and how we will come through together,” as Keller has said. She offers her own experiences and her open and affirming Christian faith as touchpoints that a wider audience can find itself in. Keller has chosen Grant to compose music for her lyrics. It’s easy to understand why—this composer and pianist is a frequent collaborator with Keller and like her is an internationally recognized artist. These artists go beyond musical virtuosity alone by offering a vision of how our society could unify around principles of universal love and the celebration of diversity that is drawn from their own lived experience as African American artists.
Thanks to Blackfish Gallery and Augustana Lutheran Church for sponsoring this project, and to Ear Trumpet Labs for furnishing microphones.

About the Artists
Marilyn T. Keller, 2016 Jazz Society of Oregon Hall of Fame Inductee, is a 38-year veteran of music and stage performance in Jazz, Gospel, R&B, Pop, Blues, and theater, nationally and internationally. Her musical roots are diverse. She has built a career that has taken her as a feature artist to Denmark, Sweden, Norway, The Netherlands, Spain, Australia, Russia and the UK for concerts, festivals, nightclubs and recording work. Her voice can be heard on multiple recordings, movie soundtracks, commercials and documentaries. Her formative jazz training was as a member of the Mt. Hood Community College Vocal Jazz Ensemble and as the vocalist fronting the award-winning MHCC Jazz Lab Band. She can be seen frequently at clubs, restaurants, festivals and holiday events throughout the Pacific Northwest. She remains active, performing with Don Latarski, Darrell Grant, Tom Grant, Black Swan Classic Jazz Band, Pressure Point Band and the Augustana Jazz Quartet, among many others.

Since the release of his debut album Black Art, one of the New York Times's top ten jazz CD's of 1994, Darrell Grant has built an international reputation as a pianist, composer, and educator who channels the power of music to make change. He has performed throughout the U.S., Canada, and Europe in venues ranging from Paris’s La Villa jazz club to the Havana Jazz Festival. Dedicated to themes of hope, community, and place, Grant’s compositions include his 2012 Step by Step: The Ruby Bridges Suite honoring the civil rights icon and The Territory which explores Oregon’s landscape and history. Since moving to Portland, Oregon he has been named Portland Jazz Hero by the Jazz Journalist Association, received a Northwest Regional Emmy, and received a MAP Fund grant and the Governor’s Arts Award. He is a Professor of Music at Portland State University where he directs the Artist as Citizen Initiative.

Portland Jazz Composers Ensemble is a nonprofit organization whose mission is to create original jazz music that engages and supports our community’s diverse artists, cultures and place. In operation since 2008, PJCE is the only organization dedicated to commissioning and performing original music by Portland musicians, building a broad audience through unique, collaborative and community-oriented programming that builds bridges between communities in this vibrant city. Learn more at pjce.org.