by The Ocular Concern 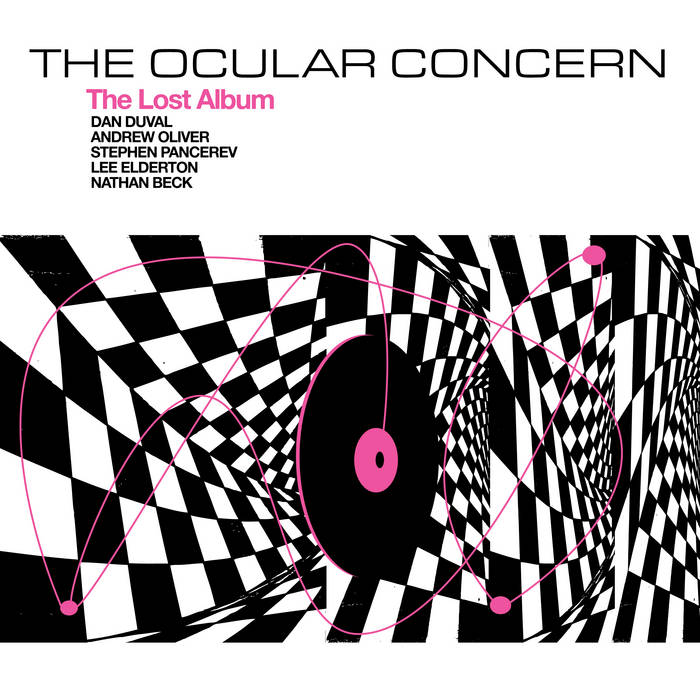 “If M.C. Escher had led a band, this would be the sound of it.” - Downbeat

PJCE Records, the recording branch of the Portland Jazz Composers Ensemble, is proud to release a new album of music by The Ocular Concern, the genre-bending quintet led by PJCE founder Andrew Oliver on electric piano and former PJCE co-director Dan Duval on guitar. The album was recorded in June 2013, in the same weekend of studio sessions which led to their award-winning 2014 release Sister Cities. The material on The Lost Album was intended to be released soon thereafter, but Oliver’s 2013 move to London for 7 years put the brakes on the project. Now back in Portland, Oliver and Duval are proud to unearth this collection of minimalist, globally inspired and melodic compositions from the archival dusty hard drives.

The Ocular Concern began as a trio in 2010 with Duval, Oliver, and drummer Stephen Pancerev, exploring interlocking rhythmic compositions and improvisations and choice covers of eastern European folk music, contemporary jazz, and the Kinks. Their debut EP was released in 2011. Despite their best efforts to restrain themselves from the logistical problems of larger groups, Duval and Oliver kept envisioning more voices in the band. After Oliver was commissioned by FILMUSIK to write and perform a new score to the 1966 Japanese monster movie “Gamera vs. Barugon,” the addition of clarinet was inevitable. Special guest David Evans was added to the trio for an exciting run of shows at Portland’s Hollywood Theatre performed for over 600 people in August 2011. The following year, Lee Elderton moved to Portland from San Francisco and assumed the permanent clarinet chair, followed shortly thereafter by Nathan Beck on vibraphone and mbira, the traditional Zimbabwean thumb piano of the Shona people. The band was reborn as a quintet and quickly assembled a rich book of originals by Oliver and Duval.

In 2013 Duval was awarded a Regional Arts and Culture Council Project Grant for the composition and performance of a new suite further extending the band’s chamber aesthetic to include special guest string players Erin Furbee, Brian Quincey, and Justin Kagan, and Alex Krebs on bandoneon, the tango accordion of Argentina. The resulting “Sister Cities Suite” was premiered at the Secret Society in Portland and released on PJCE Records in 2014, garnering praise from the national jazz press, including a 4-star review in Downbeat.

The Lost Album features the original quintet performing the repertoire the group developed and refined over their regular gigs around the Portland area from 2011-2013. Keeping with the aesthetic of Sister Cities, listeners will find an austere but friendly atmosphere peppered with minimalistic vibraphone riffs, dramatic clarinet solos, hypnotic mbira textures, and the occasional interspersing of some distorted rock guitar for contrast. The tunes range from Oliver’s “Cheap, Fast or Easy (you can only have 2)” with a dramatic swing from mellow free improv to a burnout guitar solo to Duval’s meditative “Coral Meme”, slowly unfolding judiciously spaced phrases of syncopated consonant melodies. Oliver’s keyboard provides the bass role (except for a cameo by Duval on electric bass on “Biannual/Biennial”), anchoring the sound, while Duval’s crisp and distinct guitar tone cuts through the keyboard, building a unique rhythm section texture which is spiced up by Pancerev’s uniquely creative and textural approach on drums. The vibes alternate between interlocking patterns and more melodic roles, while Elderton’s virtuosic clarinet soars above the proceedings and drives the arc of the improvisations with his fluid and spontaneous approach. As in the previous album, Beck is also featured on his specialty, the Zimbabwean mbira, to which he has dedicated a large portion of his musical life. The metallic but warm sound of the instrument provides a unique textural drive on “Biannual/Biennial” and “Concept Loops #1”.

PJCE Records is excited to finally release this unique effort by The Ocular Concern. Though the band members have moved into other musical and life spheres since the recording of The Lost Album, it captures a unique Portland band at its peak and offers another glimpse into the quality creative music scene in the city, as well as providing some new sounds during this time when live performance has been put on hold due to the coronavirus pandemic.

“Captivating [...] The category-defying chamber quintet constructs and deconstructs intriguing pyramids of texture, counterpoint and harmony. [...] Although exacting and sometimes brainy, the Ocular Concern’s music ultimately charms with a melodic and almost innocent sense of wonder.” – Downbeat

“The album hovers very close to masterpiece-like proportions. There is no filler material as the program seizes your attention from start to finish. [...] Duval and Oliver shine as gifted composers, possessing deep insights into various genres and styles.” – Glenn Astarita, All About Jazz

“This is the new band of the year in my book. Watch for them.” – Oregon Music News