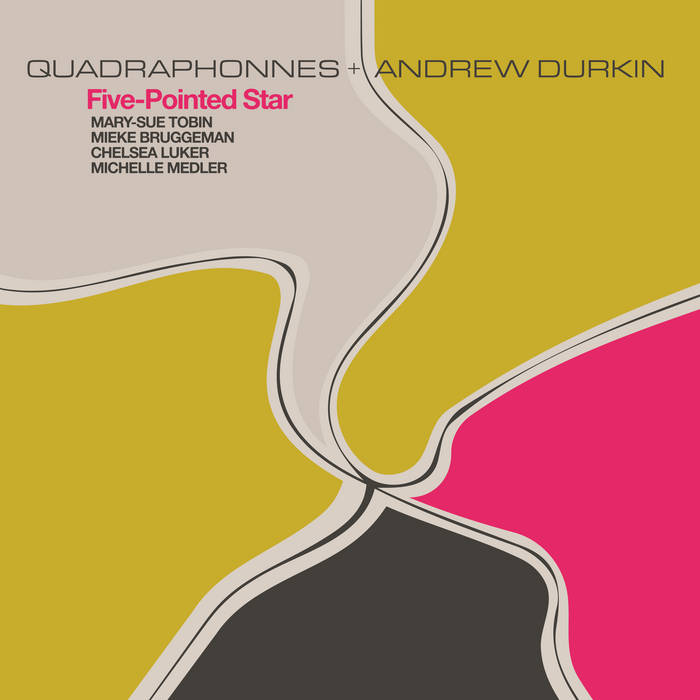 From the moment he first heard the Quadraphonnes perform back in 2008, Durkin knew he’d found the perfect vehicle for his music—and Five-Pointed Star is the result of that epiphany. Showcasing the talents of Mary-Sue Tobin on soprano sax, Chelsea Luker on alto sax, Michelle Medler on tenor sax, and Mieke Bruggeman on baritone sax, the album draws on a wide range of Durkin compositions—including some of his earliest pieces for the Industrial Jazz Group, as well as material written specifically for the Quadraphonnes. (For good measure, there is also a Durkin-arranged cover of “From Out of Nowhere,” by Gen-X alt-metal pioneers Faith No More.) With their effortless ensemble sound and their distinctive musical voices, the Quads bring a startling freshness to Durkin’s music and enhance his trademark melodicism and humor with their own brand of sharp wit.

Five-Pointed Star comes in the wake of Durkin’s initial offering on PJCE, the widely-praised Breath of Fire (2016), which earned a four-star review in Downbeat. Before that, Durkin led Los Angeles’s cult-favorite big band, the ​Industrial Jazz Group​, in which he honed an eclectic, personal style influenced by composers ​Frank Zappa​, Raymond Scott, Spike Jones, ​Charles Mingus​, Carla Bley, Duke Ellington, and Thelonious Monk, and incorporated elements of metal, Baroque, and American roots music. Durkin released five albums with the IJG, with whom he also performed throughout the United States, as well as in the Netherlands, and Italy. Durkin has also written soundtracks for experimental films, commissions for various schools and performance groups on the West Coast, and a growing body of soul-searching songs for his rock band, Sunnyvale.

​ A veritable force on the Portland music scene for over a decade, The Quadraphonnes is a saxophone quartet that unapologetically flaunts female power. They play a wide range of styles, display their impressive instrumental technique, and have no qualms about showcasing their feminine stage presence. On their own, they have two full-length albums, and are known for putting on memorable performances, including playing this music of Andrew Durkin’s at the 2017 Montavilla Jazz Festival. Members of the Quadraphonnes have been involved with the Portland Jazz Composers Ensemble and PJCE Records since their inception, and have played pivotal roles in the direction of the organization.