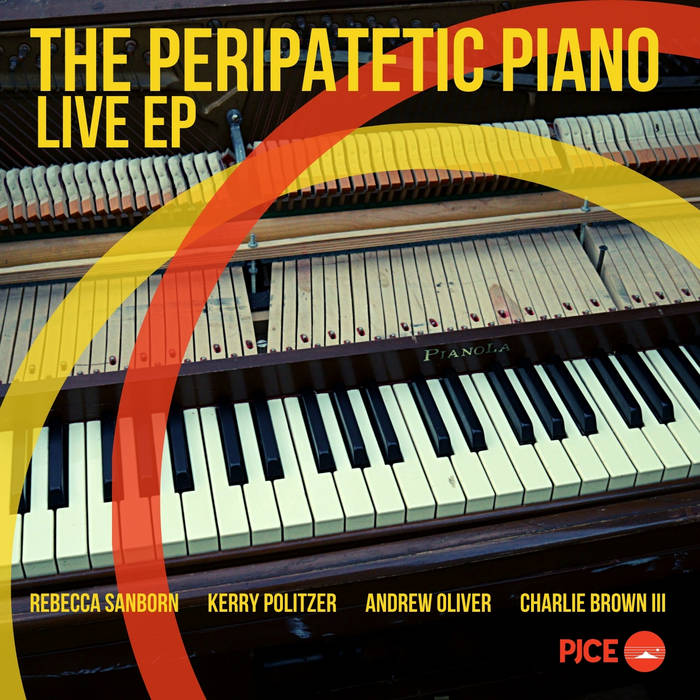 Peninsula Park is a beautiful location featuring Portland’s oldest public rose garden, surrounded by stone and brick pathways and staircases. It has become a summertime setting for outdoor socializing, exercise, and meals that would normally have taken place indoors. The park has also been the backdrop for recent vigils for Elijah McClain, a Black man killed by police in Aurora, CO in 2019 and other demonstrations connected to the Black Lives Matter movement. The setting isn’t just a pretty backdrop, it is a three-dimensional symbol of life in Portland right now as the pandemic and racial justice protests continue.

The musicians are playing a vintage Pianola upright player piano, which Andrew Oliver (who is incidentally PJCE’s founding Executive Director) made portable by removing the player mechanism and adding wheels. It is a 66-key instrument with a surprisingly bright, resonant tone, a quirky sonic character more reminiscent of a smoky juke joint than a concert hall.

The performance was filmed, recorded, mixed and mastered by PJCE Executive Director, Douglas Detrick, and many of the videos are available on the PJCE YouTube channel for free, or available to PJCE Sustainers. This project was sponsored by Belmont, currently offering Breakroom in a Bag with zero contact home delivery, and Betty Booher. All musicians and technicians present at the recording session wore masks and maintained social distance. pjce.org

Kerry Politzer is a Portland-based jazz pianist, composer, and educator. She serves on the music faculty at Portland State University and University of Portland. Kerry received a Bachelor of Music in Jazz Piano from the New England Conservatory of Music, where she studied improvisation and composition with the late jazz guru Charlie Banacos. She has released six jazz CDs as a leader, including “Blue in Blue,” which featured saxophonist Donny McCaslin. In 2019, Kerry was awarded a Regional Arts and Culture Council Artistic Focus grant to explore the music of Brazilian composer Durval Ferreira. The project culminated in the August 2019 release of “Diagonal: The Music of Durval Ferreira.” Kerry also received an Artistic Focus grant to present “Music of Brazilian Piano Masters: Donato, Pascoal, and Salvador.” The pianist leads Bossa PDX, a group for which she has transcribed dozens of classic bossa nova arrangements from the original recordings.

Andrew Oliver is a pianist from Portland, Oregon, specializing in stride piano, 1920s jazz and blues, ragtime, and tango. His playing is energetic and authentic, drawing on the styles of pianists such as Jelly Roll Morton, James P. Johnson, and Earl Hines to deliver a stomping style which emphasizes the exciting groove that brought jazz to the forefront of popular music in the 20th century. A specialist in the music of the great New Orleans pioneering pianist and composer Jelly Roll Morton, Andrew and David Horniblow's duo album of Morton’s tunes on Lejazzetal was selected as one of the 10 best jazz albums of 2019 by the Times (London). Andrew lived in London from 2013-2020, performing in the UK and Europe with a number of acclaimed groups including the Dime Notes and Vitality Five and has recently returned to Portland. Andrew is a co-founder of the Portland Jazz Composers Ensemble, a 2012 Chamber Music America New Jazz Works recipient, and an Oregon Arts Commission fellow.

Rebecca Sanborn began writing songs at age six, starting an early pattern of creative straying from sheet music. The love affair with stories and music continued and at eighteen, she left her native Portland to study at the Contemporary Music Program at The College of Santa Fe, in New Mexico. Upon returning to the Northwest, Rebecca met her husband and musical partner, drummer Ji Tanzer. They are both members of the adventurous jazz quintet, Blue Cranes; the art pop trio, Swansea; and Portland’s veteran indie group, Loch Lomond. Rebecca also plays in the all-female, cape-wearing, fog-machine-loving synth trio Eccoh Eccoh Eccoh with Kyleen King and Jenny Conlee-Drizos. When she is not playing music or teaching, she can be found chasing after her disco-obsessed two-year-old daughter or trying to get some sleep.

A young pianist and producer, Charlie Brown makes genre-bending jazz that touches upon contemporary R&B, funk, and soul. Brown gained wider prominence after producing for and sharpening his production skills with Portland-Born Rapper, Aminé. Brown has also been gracing many stages and studio sessions with R&B, pop and soul artists including Blossom, Hailey Niswanger, Mike Phillips, Farnell Newton, Jarrod Lawson, and many others.

Portland Jazz Composers Ensemble is a nonprofit organization whose mission is to create original jazz music that engages and supports our community’s diverse artists, cultures, and place. In operation since 2008, PJCE is the only organization dedicated to commissioning and performing original music by Portland musicians, building a broad audience through unique, collaborative and community-oriented programming that builds bridges between communities in this vibrant city. Learn more at pjce.org.