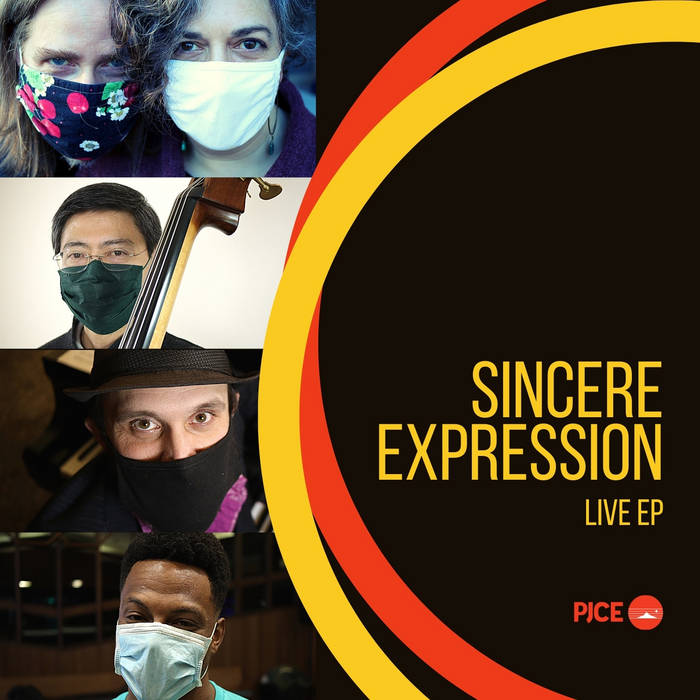 (PORTLAND, OR)— A diverse group of composer-performers continue Portland Jazz Composers Ensemble’s PJCE LIVE EP series with solo and duo performances. These Portland residents show the value of personal truths expressed through music is particularly potent as our nation reckons with the consequences of misinformation surrounding the insurrection at the Capitol and the ongoing pandemic.

Bassist Shao Way Wu; a duo with pianist Todd Marston and trumpeter Justin Copeland; and the saxophone/spoken word duo Thick in the Throat, Honey (John C. and Claudia F. Saleeby Savage) each perform their own compositions in a collection of pieces that offer an intimate view of the wildly creative and divergent styles that can be heard from Portland’s jazz composers all in one release.

Trumpeter Justin Copeland said that his composition on the project celebrates “being the light by way of our sincere expression” during a dark time, and inspired the title of this project.

Justin Copeland is a trumpet player, pianist, composer, and music educator based out of the Central Valley city of Fresno, California. He has spent the past 10+ years performing all over the United States and abroad (Mexico, Canada, Cuba, and others), and currently resides in the Portland, OR area. Justin earned a B.A. in Music Performance from California State University, Fresno (Fresno State) in 2011, an M.M. in Jazz Studies from Northwestern University in 2013, and he is currently finishing a D.M.A. in jazz studies from the University of Illinois at Champaign-Urbana. During his eight-year tenure in the Chicago area, Justin shared the bandstand with many world-renowned musicians including saxophonist Victor Goines, vocalist Dee Dee Bridgewater, saxophonist Branford Marsalis, singer/songwriter Solange Knowles, and jazz vocalist Kurt Elling. In 2017, Justin won first place in the Yamaha Jazz Division of the National Trumpet Competition, and was one of the five finalists selected to compete in the biennial Carmine Caruso International Jazz Trumpet Competition. In February 2020, Justin was selected as one of 30 candidates worldwide to audition for the Herbie Hancock Institute of Jazz, where he performed alongside his fellow candidates for a panel of adjudicators which including trumpeter Ambrose Akinmusire, saxophonist Wayne Shorter, and pianist and program director Herbie Hancock.

Todd Marston has pursued a diverse music career ever since his days playing in punk bands and jazz combos as a teenager. He received a jazz performance degree at Berklee College of Music in 2004, toured nationally as a sideman with singer-songwriter Sonya Kitchell in 2006 and indie folk pop band The Grownup Noise (2007–15), and performed extensively in Asia with the Sam Hooper Band, Avis Ellis Trio and Mike Null’s Soulcasters (2008–11). Todd’s main passion has always been composing and songwriting. His Boston-based instrumental quartet Choose to Find, released Songs Without Words (2012), featuring Todd’s composition, ‘Above Water’, which won fifth place in the 2013 Indie International Songwriting Contest. In 2015, Todd moved to Portland, Oregon, to earn a master’s degree in jazz studies with a focus in musicians’ wellness under the mentorship of Lisa Marsh at Portland State University (PSU). Since graduating, he has become an adjunct professor at PSU, teaching songwriting combo and Wellness For Musicians. Currently, Todd spends his time immersed in composing, recording, and video production for his Patreon page. (patreon.com/toddmarston)

Thick In The Throat Honey (John C. and Claudia F. Saleeby Savage) began in 2007 at The Atlantic Center for the Arts. Morphing the traditions of jazz, spoken word, experimental music, chants, devotional intoning, somatics, and movement, the duo is known for their unique melding of the disparate and the unexpectedness of each performance. Most recently, they were a semi-finalist in the highly competitive Creative Capital Award for a project about Syrian refugees in the Bekaa Valley of Lebanon, using pieces about individual families and jazz improvisation as a form of giving the finger to fascists. Thick In The Throat Honey's work has been supported by the Creative Music Guild, Portland Jazz Composers Ensemble, RACC, the Oregon Arts Commission, Oregon State University, and Literary Arts. They have performed at The Improvisation Summit of Portland, No Fest, Risk/Reward, The Tenderness Project, Sacramento Poetry Center, The Extradition Series, and with other interdisciplinary duos throughout the Pacific Northwest. www.thickinthethroathoney.com

Shao Way Wu is a freelance jazz bassist and Portland resident who grew up in Hong Kong.